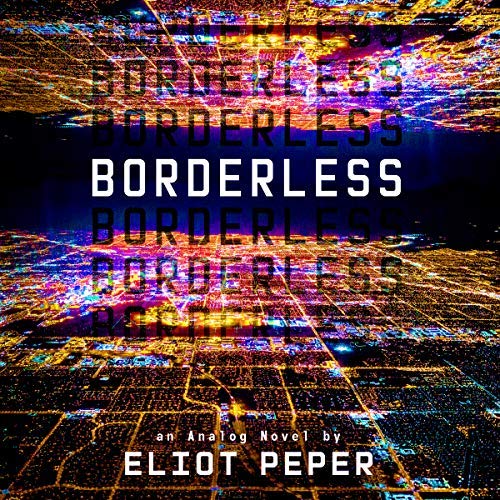 Peper Has His Finger On The Pulse of the Future

When I picked up (and quickly finished) Bandwidth, I didn’t realize that Peper was going to write a second book in this series. Once I finished the first book I was scared I wasn’t going to get another good near-future technothriller this year.  I’m glad I was mistaken.  Peper is on top of his game and delivers a stunning look into our future with Borderless.

I had to take an entire day to calm down and gather my thoughts after finishing this one before I wrote my review.  There is something about Peper’s writing that gets me all worked up (in a good way).  He’s able to map out where technology will go in such a way that instead of thinking “that might happen” you think “oh god, that’s going to happen.”   He’s also able to sprinkle in some of the consequences (and what people will do to make money off of them) of things like global warming without coming off as preachy.  It’s matter-of-fact, the ice caps went away and then this happens.

I honestly can’t dive too much into the story without giving away a ton of spoilers.  The main character, Diana, even though she’s a spy, is so incredibly relatable it’s uncanny.  There was a scene where… things don’t go her way and her instant feeling of betrayal (and continued stories convincing herself that was true) is something that a lot of us are guilty of. We instantly assume the worst.

If I had a connection with a TV or movie studio and I was able to pitch one thing to them – it would be this series (and honestly anything else Peper has done since most of them seamlessly blend into the same universe. I think that his eye for the near future and his voice in these stories are so near-perfect it’s hard to describe.

Overall, Peper writes a book with believable characters, believable aspirations, and especially believable tech. Borderless is a book that I won’t forget. It’s also making me watch my social media feeds a little closer to see what technology is released (and catches on) in the next 1-3 years.

I know that Peper has another book slated for early 2019 but I will be keeping my eye on my feed(s) to see what else he has up his sleeve.

Unsure if I can write this without spoiling it – but I would love to see a novella (or full-length novel from multiple points of view) of the “awakening” moment near the end of Borderless when things happen to the feed.  I think that hearing from people when this happened – along with figuring out the panic and maybe even some self-realization.  But, maybe that’s just the post-apocalyptic fan in me.

Information is power, and whoever controls the feed rules the world in this all-too-plausible follow-up to the science fiction thriller Bandwidth.

Exiled from Washington after a covert operation gone wrong, Diana is building a new life as a freelance spy, though her obsessive secrecy is driving away the few friends and allies she can count on. When she’s hired to investigate the world’s leading techno capitalist, she unknowingly accepts an assignment with a dark ulterior purpose. Navigating a labyrinth of cutouts and false fronts, Diana discovers a plot to nationalize the global feed.

As tech and politics speed toward a catastrophic reckoning, Diana must reconcile the sins of her past with her dreams of tomorrow. How she deploys the secrets in her arsenal will shape the future of a planet on the brink of disaster. Doing the right thing means risking everything to change the rules of the game. But how much is freedom really worth?