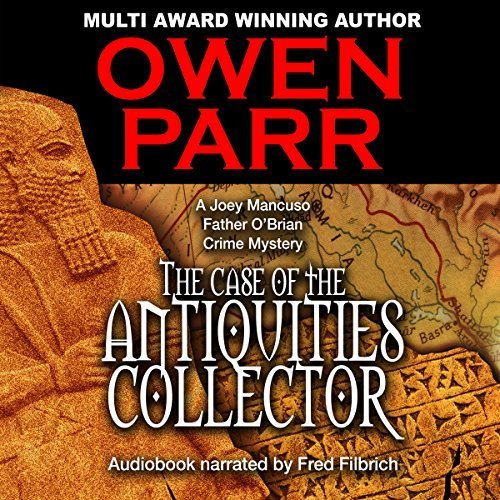 This is the fourth installment in the Joey Mancuso & Father O’Brian series and I couldn’t wait to dive in. Parr has written a world full of craziness that feels real. The character development over the past 3 books has helped make this another home run for him.

The private detectives will have it in for them when they are investigating a live person instead of a murder scene. The daughter of an accountant at a large law firm has gone missing and he didn’t call the cops but Joey and Father first. Things don’t feel right and Mancuso and O’Brien are on their next adventure.

At first, I wasn’t sure how Parr was going to tie in the Antiquities part of this – and he didn’t even need to but it was an interesting turn that I found myself enjoying. It didn’t come into play until later in the book but once it did it helped tie everything together.

Overall, Antiquities shows that Parr has grown as an author. I can’t pinpoint any specific thing that was different but it just felt a little more “mature” which actually sounds terrible as I write it. Don’t get me wrong – the jokes and humor are still there but maybe it was the case type that showed me a different side to Mancuso.

As always, a narrator can make or break a book (and especially a series). Filbrich IS the voice of Joey Mancuso in my head – I hope that Parr and he continue to work together. He narrated this story with heart and I’m glad that I was able to listen to it.

I think that you could read this book without reading any of the other stories but why would you? Binge all four books for a PI hangover like you were drinking all night in the Irish bar that they co-own.

When Gavi Drucker, the daughter of multi-millionaire socialite Aaron Drucker, is abducted from her dorm at the University of Miami, retired NYPD homicide detective Joey Mancuso and his half-brother, Father Dominic O’Brian, are hired to find her. Afraid the young woman has been kidnapped for ransom, or worse, might be sold into the lucrative sex-slave market, the two New York City private detectives soon uncover clues that indicate this is more than just a simple abduction.

Before long, the two brothers’ search for Gavi crosses paths with the FBI, Department of Justice, and Department of Homeland Security, who are investigating the black-market sale of rare antiquities and aren’t happy with the brothers’ interference. Is Gavi’s father—whose top-tier accounting firm caters to a worldwide clientele who will do anything to keep their financial dealings private—somehow involved? Is the terrorist group ISIS? The more clues they uncover, the more danger they find themselves in. Because those involved will do anything to keep their secrets safe, including kill.

Joey Mancuso is back in the fourth book of the Mancuso &amp; O’Brian Crime Mystery series and more determined than ever to live up to his moniker as The Last Advocate of the Victim as he investigates crime with his usual Sherlock Holmes style in this fast-paced, taut thriller, where what you see isn’t always as it seems.