I played around with these for a few days before leaving my review. Now, I’ll set the stage since I’m a picky audio guy – and because I have specific wants/needs for in-ear headphones. Especially being an audiobook listener. I wanted to call out some features that I liked and didn’t like. But wanted to share it with everyone here since I’m always looking for another comfortable set of headphones to listen to audiobooks for an extended period.

I apparently have a smaller left ear than my right (or at least the spot where the headphones go). I noticed this because I own AirPods and AirPod Pros, and I actually like the original AirPods better. The noise cancellation/fit of the Pros doesn’t work for me.

Saying that, the Creative Outlier Pros were a really nice fit. I went with the medium (pre-installed) in my left and the smaller in my right. 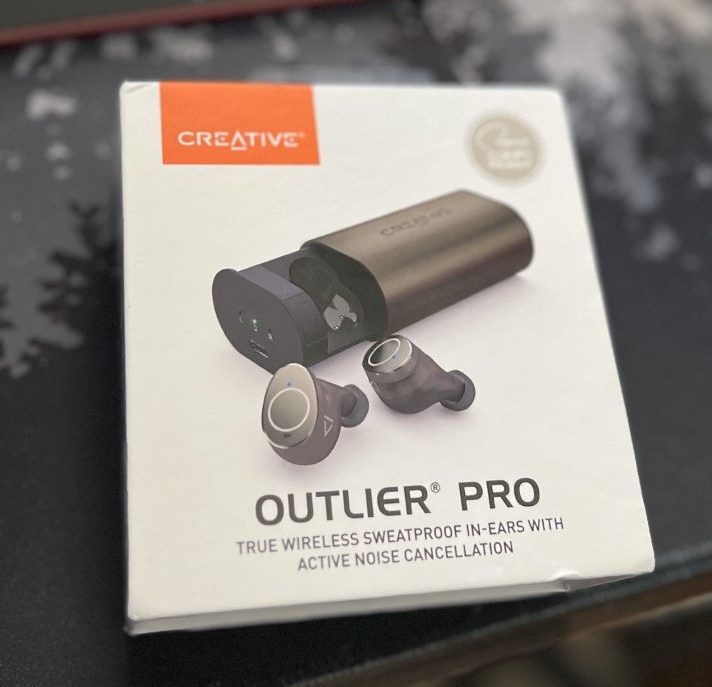 Comfort – B+
They are comfortable. The longest I’ve worn them is 1-2 hours doing normal office work and listening to audiobooks and music. They didn’t cause the typical ache I feel from other in-ear headphones (like AirPod Pros). They don’t seem to move around a lot when I talk or smile, which my other headphones do. I also wore them taking my dog for a walk numerous times, and had no issue with the jostling of running/walking.

Sound – B
I don’t like having to install yet another app (or two in this case) to make sure that my headphones sound nice BUT saying that, once I had the Creative app installed, it asked for a firmware update. So I’d recommend doing that just because updates usually fix issues. The ability to change how they sound via an Equalizer is also a plus. I had my original rating around a C or C+ because the sound was a little tinny, but after messing with the EQ a bit, I was much happier with the sound. Being able to set presets, too, is great. So my audiobooks can have a different sound than my music. 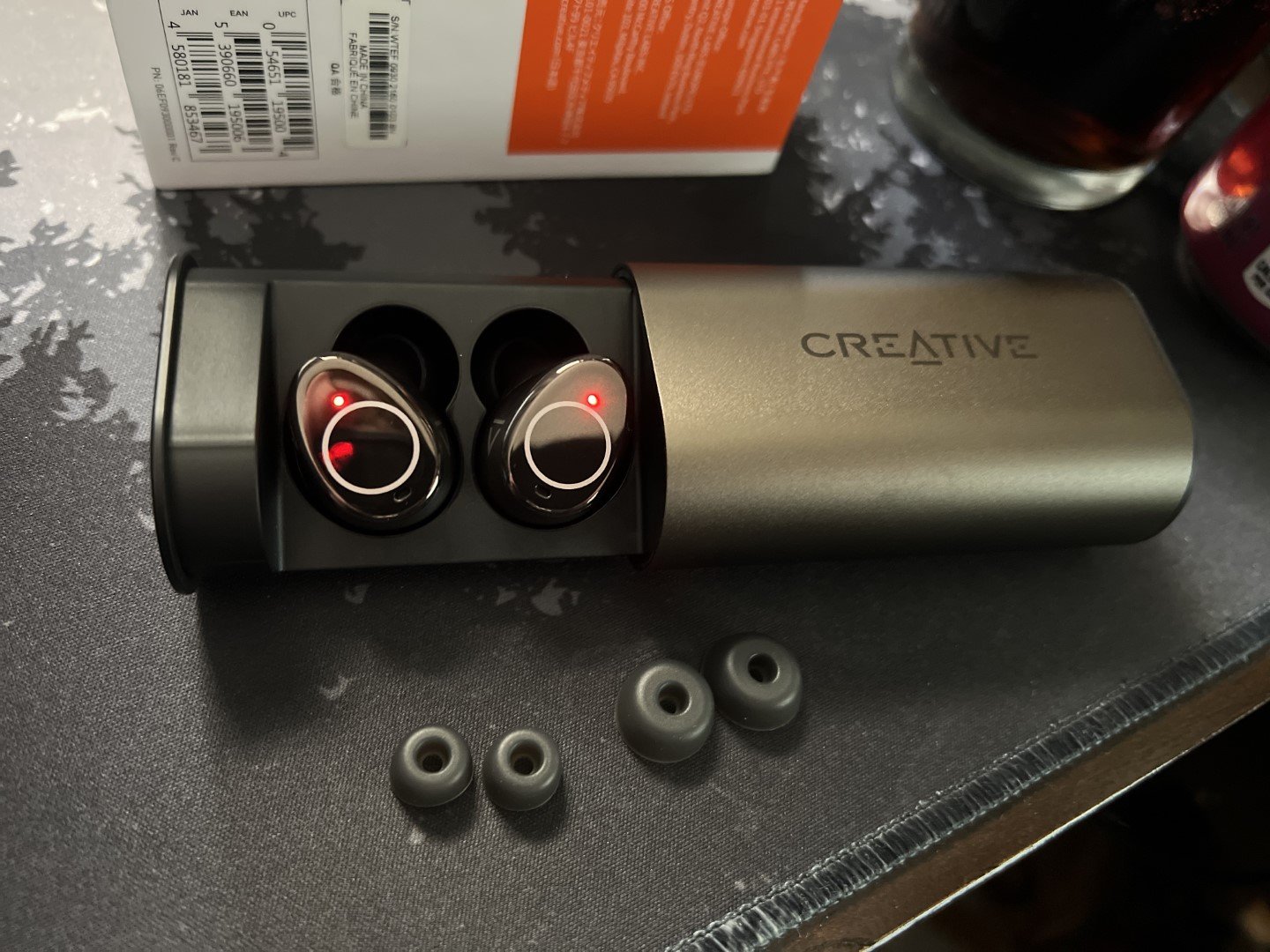 Battery Life – A
I haven’t gotten to test these limits yet, but I’ve had around 6-8 hours of listening time from one charge, and I don’t know how long it’ll run until I need to charge them again. I wasn’t worried about them dying mid-run, and I like that the charger can be plugged in (via USB-C, thankfully) OR set on a wireless charger. A great double feature.

This is the most disappointing one to me. I think because the AirPods are SO easy to use and set up. But I will say this has more features. A few things have happened that frustrated me in my few days of use, and it’s mostly user error with a little design/function issue.

The two biggest features I had an issue with were: 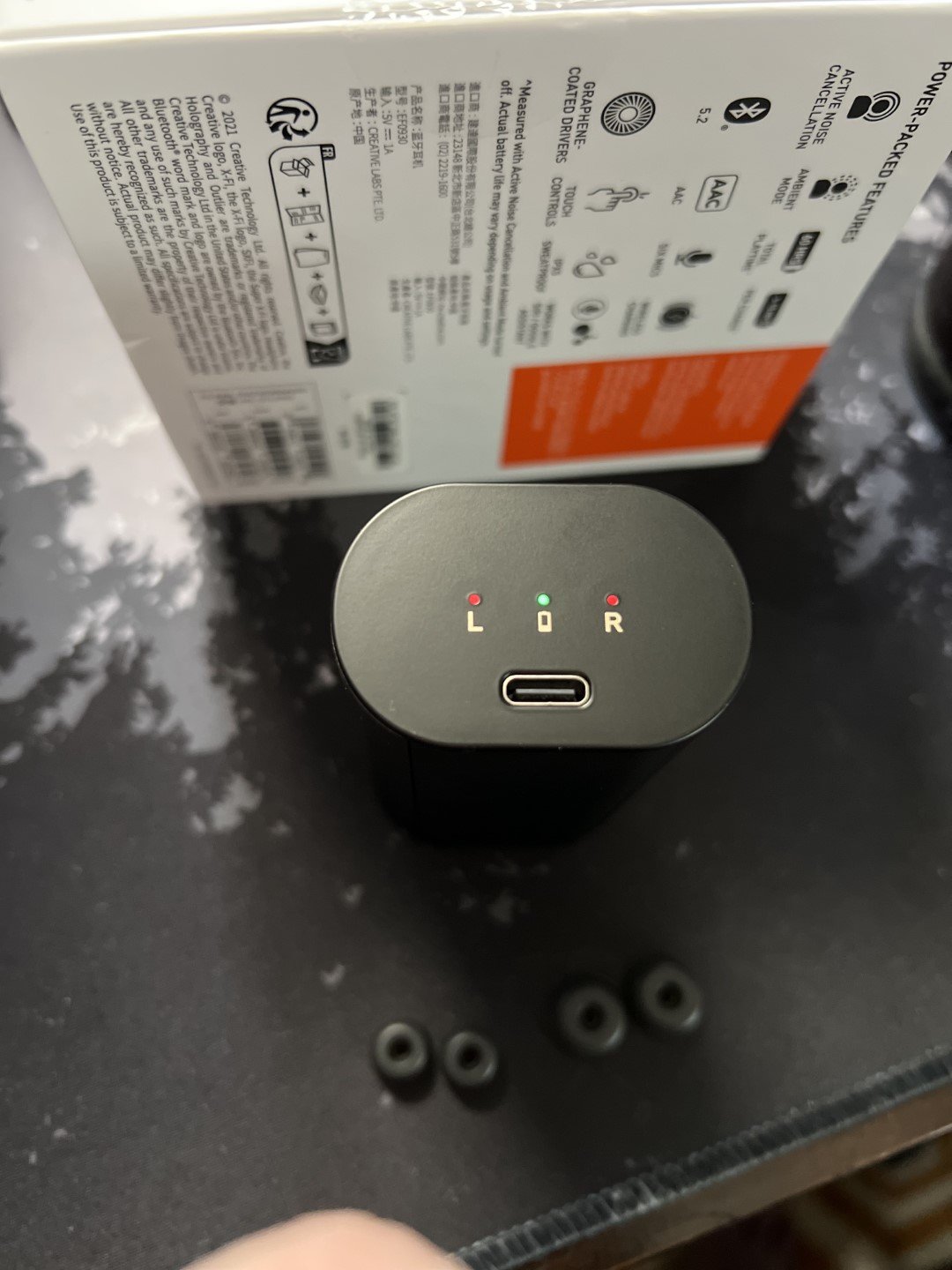 Looks – B+
I like the looks of these. They are clean and look good in my ear. The case is nice, a little on the big side, but I’ll take the clunkier size including wireless charging. Same with the headphones themselves, the size doesn’t bother me but could bother some others. They didn’t feel heavy in my ears like I expected them to.

Noise Cancellation/ANC/Transparency – A
The surprise feature of these is the excellent noise cancellation. Comparing them to my AirPod Pros, because I can’t get a good seal (and they could be part of the Apple recall), these seem to perform better with ANC. I tested this a few ways but haven’t gotten on a plane or a noisy car yet. I might test them on my mower to see how well it does compare to my over-ear headphones for ANC. The Transparency mode works well, too. I had that on last night on my walk and heard my music and the people I was trying to talk to.

Overall – B
I like these a lot and will daily drive them some more. I think these just replaced my AirPod Pros for ANC listening, and I haven’t tested them for the mic on calls, but will test that and add a rating if it’s worth calling out (good or bad).