The Darkness Outside Us by Eliot Schrefer (Narrated by James Fouhey) 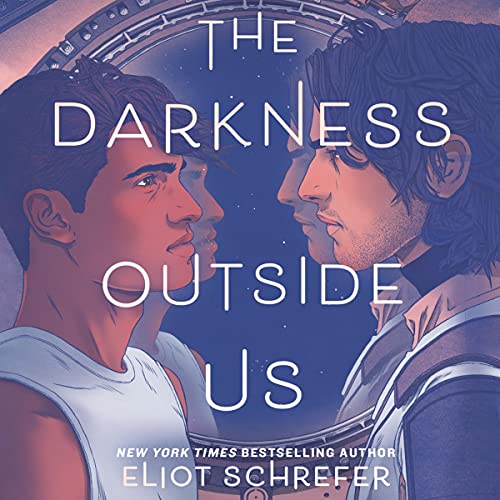 I went into The Darkness Outside Us completely blind, except for a tweet that I saw from Kit. Now, I don’t want to “blame” anyone since that word has negative connotations to it, but a HUGE shoutout to Kit from Metaphors and Moonlight for tweeting about this book.

I got book mail, The Darkness Outside Us, one of my faves this year! Look how beautiful it is! (This is a terrible photo that doesn’t do it justice.) I can finally hug it against my chest 😄😭 It just feels like the kinda book that needs to be hugged. Thank you @The_Morda_Shin!! pic.twitter.com/cIsriP7m7M

I’d had it on my list and remembered seeing some posts about it earlier in the year. It might have even been around the time that Andy Weir’s latest release, Project Hail Mary, came out. So I thought “I just did space, maybe later”. Then promptly forgot about it. Anyway, Kit’s post about it being one of her favorites made me think “okay, let’s try this out” and people…

Wow. Just wow. I don’t say that about a lot of books but Schrefer absolutely blew my mind with this one.

Now, it’s going to be impossible to talk about this one in any depth because Schrefer throws a ton of twists and turns into it. But it is a beautifully written, enchanting, haunting science fiction book that absolutely blew me away. The different things that happened, especially around each “part” of the book were just like “wait, did that just happen?” And Schrefer’s ability to make me fall head over heels in love with the characters is second-to-none.

Overall, I’m so so so pleased that I picked this one up as a pleasure read and I’m even happier that I read it when I did. Right before the year was over, because it was a beautifully written and haunting book that I’ll be thinking about throughout 2022.

I also want to call out the differences between the two main characters when it came to race and sexuality was interesting and refreshing. I liked that Ambrose’s side of the world had completely moved past labels – this came up a few different times and is explained really well later in the book. It was just so nice to not even have it as part of the plot, but almost as an afterthought.

They Both Die at the End meets The Loneliest Girl in the Universe in this mind-bending sci-fi mystery and tender love story about two boys aboard a spaceship sent on a rescue mission, from two-time National Book Award finalist Eliot Schrefer.

Ambrose wakes up on the Coordinated Endeavor with no memory of a launch. There’s more that doesn’t add up: Evidence indicates strangers have been on board, the ship’s operating system is voiced by his mother, and his handsome, brooding shipmate has barricaded himself away. But nothing will stop Ambrose from making his mission succeed — not when he’s rescuing his own sister.

In order to survive the ship’s secrets, Ambrose and Kodiak will need to work together and learn to trust each other…especially once they discover what they are truly up against. Love might be the only way to survive.