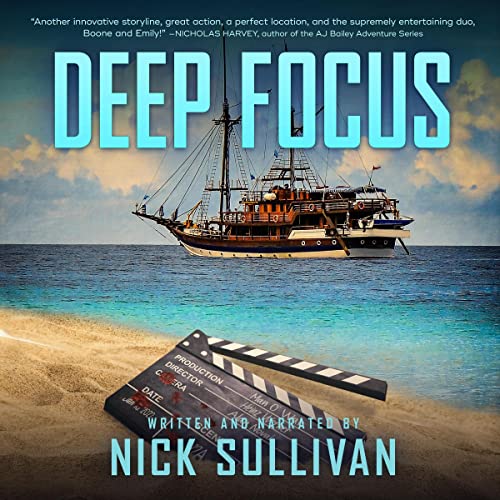 I love that Sullivan did a bit of “write what you know” in Deep Focus. I know from his other novels that he’s a certified diver and he likes to pick places that he’s been (or wants to dive) so that instantly makes the stories feel more real, but I could tell in this one that it was taken a lot from his experiences on the screen as it was from fiction. It reminded me a lot of Sullivan’s friend, Chris Sorensen’s use of an audiobook narrator as the main character in The Nightmare Room. I could just feel the realism and the honesty coming off of the pages.

This is the fifth Deep series novel I’ve read and it was probably the one that I flew through the fastest. This time the “action” was taking place randomly and the actual investigation and mystery-solving part of it were really towards the latter half of the story instead of throughout. The other parts were pure Boone & Emily fun. Lots of random jokes along with Emily being thrown into a new and interesting world.

As in all of the novels from Sullivan – the action is excellent. Each time there was an action-oriented scene it just jumped off of the page. Another thing you’re going to get out of one of his books is excellent character development. Each book has added layers to the onions that are Boone & Emily, but I love the new and interesting characters he adds in (or brings back from other novels). Also… you get lots of random call-backs to other novels and stories that Sullivan has written, this time was a callback to the excellent and funny Zombie Bigfoot among others. All this story did was make me want MORE Deep series AND more of the Creature feature books in the Zombie Bigfoot style.

Overall, Deep Focus is an excellent Caribbean-based story with great characters, settings, and intense action. A book that I absolutely devoured and one that I think you’ll enjoy as well!

Who wouldn’t want to shoot a movie in paradise? What could possibly go wrong?

Divemasters Boone Fischer and Emily Durand have left the relative bustle of Cozumel to start anew on the sleepy Sister Island of Little Cayman; population 200, give or take. In the Cayman Islands, the reefs are so spectacular and extensive, you can dive a different site every day of the year.

When a prominent film studio decides to shoot their upcoming science-fiction flick in the waters of the Caribbean island of Grand Cayman, everything initially goes well. Eccentric director Heinz Werner is brought on board, and the producers are lucky enough to score a popular young celebrity for their leading lady: sexy starlet Brooke Bablin.

After a series of strange incidents and the abrupt disappearance of the lead actress, the production of Man O’ War is suddenly in jeopardy. Is the movie suffering a stroke of bad luck? Or is it something more sinister?

Boone and Emily will have a chance to discover the answer firsthand, as the couple finds themselves thrust into the middle of this ill-fated production…where careers, reputations, and lives are stake.