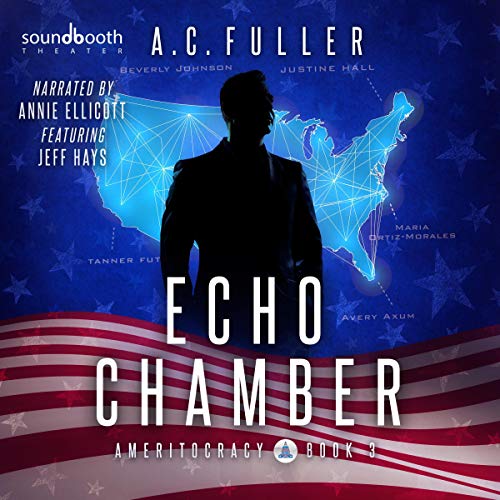 Ripped From The Election Heavy Headlines

Given the crazy times that we live in, it’s almost like Fuller took some things right out of the headlines.  Echo Chamber was another great story in this series and a great finale as well. I’ll try not to spoil it, but I was very happy with the ending.  There was enough there that it felt like a real and proper ending but left it open enough that it didn’t feel like Fuller was just going to cop out.

.@ACFullerAuthor As I’m close to finishing up the Ameritocracy series the parallels to the 2016 election (and the upcoming 2020 one) are SCARY. It’s hitting a little too close to home (in a good way, if that’s possible). Bravo!

As I said in my tweet while reading this book really hit close to home with the craziness of 2016 not so far in our mirrors while driving into the insanity that will be the 2020 election.

Another thing I was impressed by was that it didn’t feel like Fuller was trying to shove his beliefs or views down my throat as I read.  I’m sure there are more sensitive folks out there that could say he was picking a side, but since this was about a third party candidate – he was able to get away with not showing his affinity.

Echo Chamber might have been the best book in the series – I absolutely flew through it wanting to know what happened (and how they were going to figure out how to stop a certain someone).  It did not disappoint.

Overall, a great book that Soundbooth Theater knocked out of the park.  Annie Ellicott and Jeff Hays did a great job.  The team that supports them made this a perfect audiobook without any flaws or issues in the recording, engineering, or mastering of it.

After a lifetime of political disillusionment, Mia Rhodes created an alternative to the two-party system: Ameritocracy. Part American Idol, part Iowa Caucus, her online political competition will find the most popular independent candidate in America and give them a genuine shot to win the presidency.

The winner receives instant fame and a campaign warchest to battle the Democrats and Republicans in 2020.

In Echo Chamber, the third book, she sets out to transform American democracy. Now she’s afraid of what will happen if she succeeds.

Mia Rhodes created Ameritocracy to make it possible for anyone to become president. But as her online political competition races toward its finale, it’s poised to elect a Machiavellian manipulator with a winning smile, leaving Mia to wonder whether she’s changed anything at all. As the competition builds to its spectacular final debate in Washington, DC, Mia and her team must question everything they’ve done so far and defeat a threat to democracy they had never imagined.

The Soundbooth Theater team for this production: