Ever Winter by Peter Hackshaw (Narrated by Dan Stevens) 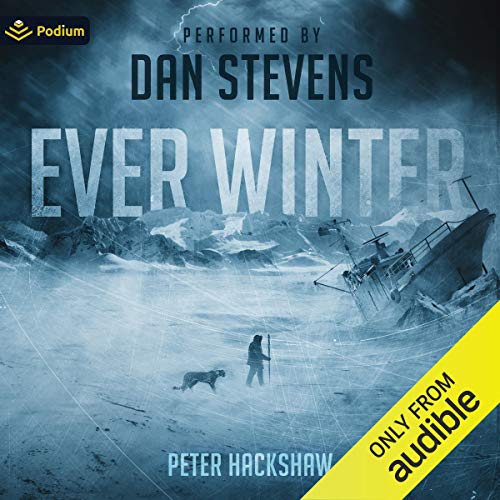 I had to go back and look at my review of The Ice Lion because I felt like this book had a lot of the things that it was missing. Ever Winter did a good job of trying to explain what happened and referred to the generations that were gone allowing me to figure out what happened in a better way.

So, on the surface, Ever Winter is a story about a post-apocalyptic snowy/cold wasteland after another ice age. On the surface, it seems like it’s going to be another Cli-Fi story, but it’s so much more. It’s a revenge story but also a story about growth.

The biggest thing that jumped out to me was the main antagonist. His character in general fits what you’d think of a slightly crazy person holding power via fear and fear alone. The funnier part to me was the accent and speech pattern that Dan Stevens went with. It reminded me a lot of King Julien from the Madagascar movies (who was a bit crazy and obsessed with being king as well) mixed a little bit with another character I can’t put my finger on. While the random connection in my head with the kid’s movies — it didn’t take away from the story but actually added to it. You could tell that he was not right and the way that he talked about and just reacted to things was helped by this accent/speech pattern.

The story itself was interesting but a few times it was a bit slow. I started this one near its release a while back – but put it down. I picked it back up and flew through the early scenes where we find out what happens to Henry. His training scenes and just overall growth was probably the best part of the whole story. Then it slowed down again (just when I thought it was going to pick up). Then, it sprinted towards the end. What I’m trying to say is that the action and fast-paced scenes seemed to ebb and flow with some slower scenes. It was okay but I was listening on a car ride and I almost turned it off because it was getting too slow.

Overall, Ever Winter was an interesting story with a lot more under the surface. It’s a story of revenge, redemption, and learning from the past. Along with probably 10 other subplots woven in for good measure. Throw in the excellent narration from Dan Stevens and you have a book I enjoyed but didn’t love.

Narrated by award-winning actor Dan Stevens (Beauty and the Beast, FX’s Legion) Ever Winter is a vivid and eloquent story of loss, rehabilitation, and revenge set in a post-apocalyptic ice world.

Far from the savage remnants of humanity, Henry and his family have managed to survive the grip of desolate, perpetual winter on a vast tundra that was once an ocean teeming with life. When the family is discovered, their peaceful existence is shattered and their lives changed forever.

Henry’s siblings are kidnapped, leaving him alone in the ruins of their home. Broken, altered, and tormented by all that has befallen him, he is driven to wreak vengeance upon those who assume him dead…by any means necessary.