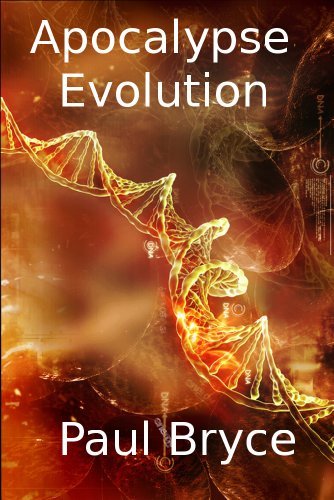 Only Eve can save them

Earth has been completely ravaged by disaster after disaster.  There are only a limited number of humans even left and all of those are protected by domed cities that keep out the devastating radiation.  Suddenly, these domes are failing or about to fail.  The only person who can save them is Eve who doesn’t even know that she holds the secret to saving the human race.

Apocalypse Evolution was a good story.  It’s definitely science fiction with a nice apocalyptic touch.  There were a few unbelievable parts, but in science fiction, you can have totally out there things that could/would happen in certain circumstances.

Bryce’s writing was tight and to the point.  There wasn’t too much wasted time in this short story.  The comes at a slight fault, though, we really don’t know much about Eve and her backstory other than that she is basically on borrowed time and being hunted. I think a little more into the who and why for her character would really catapult this short story into the great range.

A Short Story of Post-Apocalyptic Earth
Hundreds of years in the future. The Earth has been ravaged by global warming and nuclear disasters and only a few hundred thousand humans remain, sheltered in domed cities. They are protected from the toxic badlands for now. But they’re living on borrowed time – and they know it. The electromagnetic domes protecting the few remaining cities are under strain, and if they go everyone will die a horrifying death from radiation poisoning.

Eve Holsen is a new recruit to the Elite Warrior Caste, a genetically engineered soldier. When the world falls apart Eve has to make a journey through the toxic wastelands chased by an unknown enemy. The human race has one chance to survive and Eve doesn’t know that she holds the secret.

Paul currently lives in the UK with his wife and small but very boisterous Jack Russel terrier. In a previous life, he was a medical doctor but he’d much rather be writing sci-fi books.