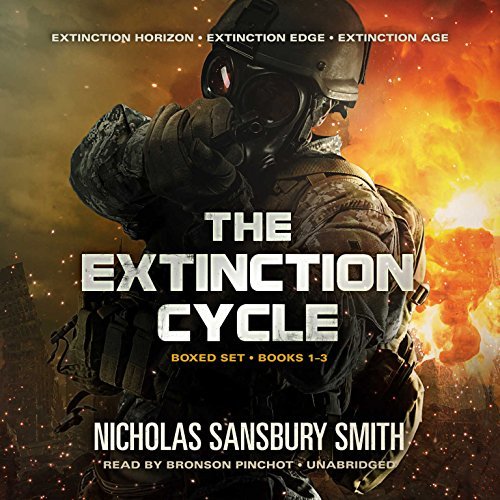 A great series (with more after it)

They thought they had a cure for ebola — what they did have was so much worse.  The potential cure ends up turning the ebola patients into crazed monsters out for flesh and blood.  Beckham and his Delta Force team thought they’d seen it all when they were called to check out an off-the-grid research center where the virus was being tested.  They had no idea what they were walking into.

The narration of Extinction Horizon was done by Bronson Pinchot who does a really nice job.  This book is gritty and at times nasty — having Pinchot narrate it really helped move some of the goriest parts along.  My only complaint was that either the author or narrator never looked up or have ever read a book with USAMRIID in it — even if you jump over to the Wikipedia page about it, you’ll quickly see that it’s commonly referred to as “you-sam-rid” — every time Pinchot said it, he said every letter.  And it was said enough times that it started to get on my nerves by the end.  If you didn’t know that or just honestly don’t know/care it won’t both you at all.

This story was good.  Smith really went into detail about the virus (which I really enjoyed) giving the readers a lot of background on the why and the how.  A lot of times, books like these will skip over these details because they think they’re not needed or take too long to explain, but I’m glad that Smith took a while explaining it.  The science behind everything he wrote seemed real to me, which makes this an even scarier book.

The action in this book was brutal.  Lots of quick scenes with brutal and needed gore.  This is one of those books that I wouldn’t have expected anything less.  I knew that it was going to be a gore-fest, but Smith made it feel needed.

I thought that the characters were well thought out and explained.  Sure some of them are just army hardasses, but there are also people who care and act on emotion rather than on instinct.  Even the way that he wrote about the infected people felt emotional and real.

Overall, Extinction Horizon was a great introduction to this absolutely terrifying world, and I’m glad that I’ll be reading at least 2 more books in the same world.  I also completely understand why there is an entire world open for writers in the Kindle Worlds for this series.  There is just so much to cover.  So many places and angles that Smith couldn’t cover in 10 books if he tried.

This book was intense.  I mean it, I couldn’t believe how much that Smith crammed into this.  It seemed like anytime it was going to let up, the opposite happened.  Every time I thought someone was safe, they were thrown back into the fire.

The variants and those infected with the Hemorrhage Virus are now evolving incredibly quickly.  To the point where the Delta Force soldiers who think they have everything figure out will be thrown for a loop or two.

The storytelling was a little different in this one.  It’s much more focused on action and involvement, and a lot less on the actual virus.  Granted the ebola virus is mostly gone and what’s left are ever changed variants.

Overall, the book was 100mph almost entirely throughout.  It was fast and gritty and very much needed.  It was so quick I honestly couldn’t believe it was over. And when I say over, I mean continued with the next book in the series.

This is also one of those books that I feel like I’m writing too much of a bland review for, but it’s really hard to write a full-length review without giving every plot point of the book away.

The start of this book was crazy! Seriously, I don’t want to give too much away, but holy cow.  I wasn’t sure how Smith was going to get the Delta Force soldiers out of the predicament they got themselves into.

The human element of this book was really well done.  There was a lot of emotion attached to Extinction Age — more than the second book had.  The soldiers have more of a heart and realize that the people that they can’t save are going to be torn apart in ruthless and unimaginable ways.

The story in Age was a good combination of military fiction and post-apocalyptic fiction with a little bit of bio-thriller thrown in.  The combination of these different genres really made Extinction Age feel the same but different in this series. (I feel weird writing that, but it makes sense in my head).

The story ends on a cliffhanger and I know how many more books Smith has written.  I definitely need a mini-break from these intense stories, but I’m sure I’ll continue the series. I also want to check out more of the Kindle Worlds books that revolve around these stories (and I’m sure I’ll understand them a lot better now).

Overall, Extinction Age (and the first three books in the Extinction Cycle series) was very good.  I enjoyed them from beginning to end, and I’m definitely glad that I read them.

Here are the first three books of the best-selling, award-winning, and top-rated Extinction Cycle series.

The worst of nature and the worst of science will bring the human race to the brink of extinction.

Master Sergeant Reed Beckham has led his Delta Force team, code named Ghost, through every kind of hell imaginable and never lost a man. When a top secret medical corps research facility goes dark, Team Ghost is called in to face their deadliest enemy yet – a variant strain of Ebola that turns men into monsters.

After barely escaping with his life, Beckham returns to Fort Bragg in the midst of a new type of war. The virus is already spreading. As cities fall, Team Ghost is ordered to keep CDC virologist Dr. Kate Lovato alive long enough to find a cure. What she uncovers will change everything.

Total extinction is just on the horizon, but will the cure be worse than the virus?

A new threat that will bring humanity to the edge of extinction.

The dust from Dr. Kate Lovato’s bioweapon has settled. Projections put death counts in the billions. Her weapon was supposed to be the endgame, but it turned a small percentage of those infected with the hemorrhage virus into something even worse.

Survivors call them Variants. Irreversible epigenetic changes have transformed them into predators unlike any the human race has ever seen. And they are evolving.

With the doomsday clock ticking, the fractured military plans Operation Liberty – a desperate mission designed to take back the cities and destroy the Variant threat. Master Sergeant Reed Beckham agrees to lead a strike team into New York City, but first he must return to Fort Bragg to search for the only family he has left.

At Plum Island, Kate discovers Central Command may have considerably underestimated the Variant population in New York. As Operation Liberty draws closer, Kate warns Beckham that Team Ghost won’t just face their deadliest adversary yet, they may be heading into a trap.

On the eve of extinction, all seems to be lost, but there is still one final hope.

Operation Liberty has failed. Humans are losing the war. With no other option, General Kennor decides to pull back the troops and give science a second chance.

Trapped in the extensive sewer system beneath New York, Master Sergeant Reed Beckham and the survivors of 1st Platoon must battle through the tunnels – where they make a grisly discovery in their attempt to escape.

At Plum Island, Dr. Kate Lovato is working on a new bioweapon to destroy the Variants. But when a derelict Navy destroyer crashes into the Connecticut shoreline, she is forced to deal with a nightmare she thought had ended.

As the doomsday clock ticks down and military bases fall across the country, the human race enters the age of extinction.