From Above by Jeremy Robinson (Narrated by Jeffrey Kafer) 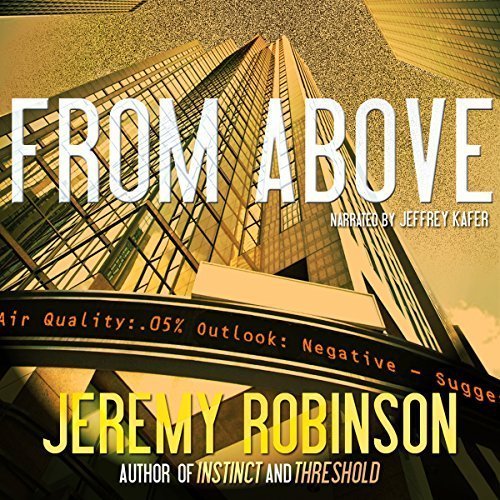 A short but telling story

Jeffrey Kafer is one of the best narrators working today.  I completely understand why Robinson works with him again and again.  His voice just lends itself to almost any character and situation.  This is another one of those cases that these two work perfectly together.  Kafer is able to bring out the best in Robinson’s work time and again.

Sometimes a short story is just that… short.  And sometimes it’s much, much more.  From Above is one of those stories.  I genuinely couldn’t believe the back story that Robinson was able to get into such a short story.

The characters were incredibly real and likable.  Even the story itself seemed to be plausible.  Yes, it’s a science fiction story that takes place in the near future, but even the way that things were laid out were totally believable.

The character interactions (and differences) made a unique subplot to this story, stealing the show at times.  Needless to say, I’m not really surprised that I liked a Jeremy Robinson book.  I really haven’t disliked anything I’ve read by him yet.

If you’re looking for a short story that will take 40 minutes or so — this novella/short story is for you.

Far in the future, the Earth is surrounded by a half-mile thick layer of space junk, some of it trash, some of it giant advertising billboards, some of it space-winni vacationers. But Priest, a sexist narcotics detective for The Authority is more interested in the terrorist group whose strange new weapon took a pot shot at his city and atomized everything inside its target area--including his arm.

Priest finds himself partnered with the tough and sexy Rehna, a fellow Authority officer, and Gawyn, a brilliant little girl whose gruff attitude matches Priest's. The three of them track down the terrorists, and their weapon, while Priest looks to deliver his unique brand of justice and get compensation for not one, but two ruined Tac-suits.