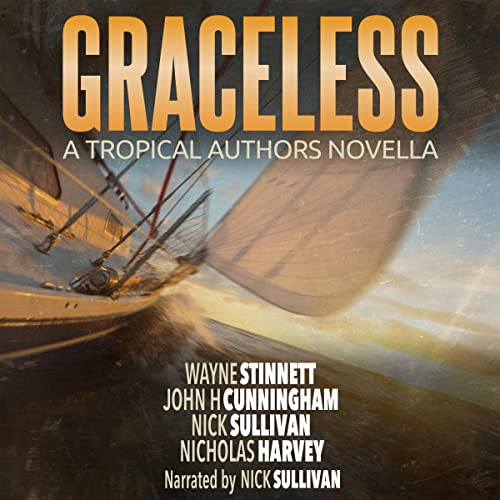 I knew going into this that it was going to contain all of the main characters from each of the listed authors. But what I didn’t know was how the heck they were going to mix together. I know that Sullivan has done this in bits and pieces featuring some other characters in his stories – but 4 authors’ main characters together? Well, I have to tell you this… they nailed it.

Graceless (an awesome name for the book by the way) was one of those stories that from the get-go didn’t feel like it was going to be a long read. I knew from the opening few paragraphs that I was likely going to finish this in one sitting. Right away we have the disappearance of Nathan’s wife Grace and their new sailboat. Nathan will do anything to try and get her back and what followed was a crazy island-hopping adventure that put us right in the driver’s seat with Nathan.

Combining 4 authors’ work into one novella shouldn’t feel this seamless. I commend everyone involved for being able to write such an interesting and unique point of view without it feeling like 4 separate books. Sure, each “part” of the book was written by someone else and featured their characters. But I couldn’t tell that the writing styles were any different. The pacing and dialogue all felt seamless and really felt like one author penned the entire thing.

Overall, I thought that Graceless was awesome. The action and intrigue were there. And it gave me a glimpse into each of the authors’ points of view, locations, and a little about their characters. I already read The Deep series from Sullivan but I might need to pick some more of these up and give them a try. Especially on audio.

A lifelong dream becomes a nightmare. When his wife, Grace, and their new sailboat go missing, Nathan Fitzgerald will do anything and everything to get her back. Nathan, a high school football coach in the Florida Keys, is in way over his head. Turning to strangers when authorities are reluctant to help, he begins a frantic international hunt.

Buckle up as Graceless takes you on an exhilarating chase around the Caribbean with twists and turns at every stop. Written in four parts by four best-selling Tropical Authors, the story plunges Nathan into the worlds of each author’s characters in a desperate search for Grace.

Whether you’re new to these fan favorites or an old friend along for the ride, you’ll love seeing them band together in this tropical action and adventure thriller: