Heads Will Roll by Kate McKinnon, Emily Lynne (Narrated by a full cast) 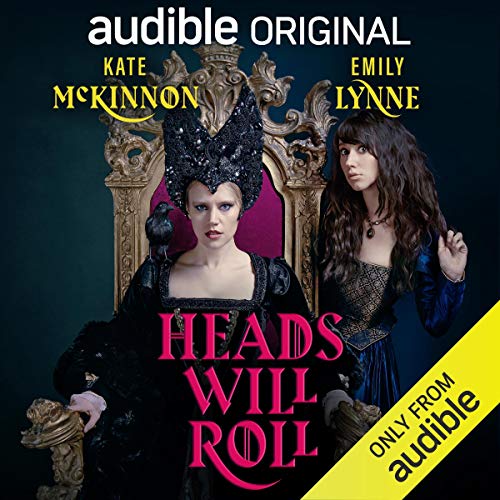 While I will acknowledge she is not everyone’s cup of tea, I don’t think there is anyone who can deny that she is immensely talented when it comes to throwing herself so completely into a role, she becomes another person. From her SNL days to the countless movies, she has never failed to deliver an utterly unique character and performance. Love. Her.

Heads Will Roll is another in the long line of accolades she deserves. This incredibly indelicate, course, raunchy, perverted, psychotic, disturbed, hysterical, train-wreck of a show is pure comedy gold. Written alongside her sister, Emily Lynne, this just truly odd story follows McKinnon as Queen Mortuana of the Night Realm and her ditzy minion, who is a princess turned raven played by Lynne. In this the queen, who prides herself on being from a long line of evil queens, must somehow hold her kingdom together in the face of a potential peasant uprising and the notion of democracy. Now, while that may sound like some heavy topics for such a comedy, the first thirty seconds will dispel that notion.

In the first scene the Queen is speaking to a peasant and insults everything about him. His clothes, his voice, his smell are all offensive and while giving him no chance to explain why he was there, she yells for his head to come off. Which it does. But as the sound effect for the axe falling (yeah, it sounds like you think it does) is still echoing the Queen exclaims, “Oh, that was my Postmates driver! My bagel!”
There are no clichés left untouched in this 10-episode production especially when it seamlessly jumps back and forth between what would be known in Medieval time (“What is salt?”) to decidedly modern takes like a support group for royalty who’ve been turned into animals. It’s absurdity with no explanation and I am here for it. I don’t need to know why the Queen knows what Postmates is but doesn’t get what democracy is. It’s just funny.

A star-studded cast is exactly what this needed and you’ll spend a great deal of time saying to yourself, “That general of the army sounds an awful lot like…no…it can’t be…” And then you will find out that, yes, it is them. My personal favorite was Peter Dinklage and his oh-so-wrong love interests. I can only hope that behind the scenes of these recordings they were all belly-laughing at their lines. I know I had to pull my car over once because I couldn’t stop laughing and it was making me swerve.

Do yourself the favor of giving this a listen with zero expectation of anything making logical or reasonable sense. It’s absurd and perfect. Oh, and don’t let the kids listen or you will be explaining a LOT of things you didn’t think you would need to explain yet. Or do and jumpstart some conversations. You do you. Much as Kate McKinnon does her. Did I mention I love her?

Heads Will Roll is an Audible Original from Saturday Night Live star Kate McKinnon and her co-creator/co-star (and real-life sister) Emily Lynne. Produced by Broadway Video, this is not an audiobook—it’s a 10-episode, star-studded, audio comedy that features performances from Meryl Streep, Tim Gunn, Peter Dinklage, Queer Eye’s Fab Five, and so many more.

Queen Mortuana of the Night Realm (McKinnon) and her ditsy raven minion JoJo (Lynne) receive a prophecy about a peasant uprising. Together, they must journey to find the Shard of Acquiescence, which will put down the rebellion and save the throne. Will their friendship survive sensitive generals, chatty sex slaves, whiny behemoths, princes with bird fetishes, and the notion of democracy?

Audiobook Review: Life of the Party by B

One thought on “Heads Will Roll by Kate McKinnon, Emily Lynne (Narrated by a full cast)”