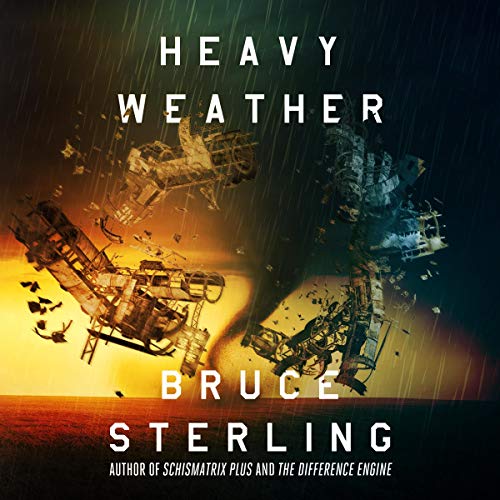 This one is a weird one for me. Sterling published this in 1994 and a lot of the climate-specific things in it were pretty accurate. I don’t think he gives a time when this is actually happening, but I’d be willing to bet it was around the time I was reading it. It made it interesting to read when I did because he was right about a lot of things and obviously off (at least off so far) about some of the others.

I think the thing I had the hardest time wrapping my head around was that the characters I followed throughout the book were living in this sort of post-apocalyptic world – it felt like it was just them and a bunch of other outsiders wandering the wastes. But in reality, from what I could tell – there were still major cities and basically “normal” life. It sounded like crops and other things were rare, but I had the hardest time jiving the world that the storm chasers were living in and the outside world that others lived in.

The technology that Sterling wrote about all either came to fruition or is likely close. I think that’s awesome and it reminded me of reading Michael Crichton’s books in the future. The technology in Congo (satellite video for example) and the gene splicing/merging techniques in Jurassic Park were WAY ahead of their time. Some of the drone things in Heavy Weather along with the way that they hacked into different things – all “possible” in the 90s but MUCH more realistic and we’re probably even ahead in some ways. I think Sterling was able to get a lot more right than not.

I couldn’t tell if this book tried to be a “warning” book about global warming, a story about a group of people and the issues they faced (human interest piece), or an action-packed story. I went into it expecting more of the latter and that was really only a few parts of it. The story seems to be a human interest-type piece. It was a lot about this “pack” of people – their issues, problems, stressors. And it felt like there was SO much more out there that Sterling could have covered.

When I finally got to the F6 part of the story, I’d already set down the book 3 or 4 times because I was just losing interest. I think the beginning to end of the book was “okay” but that’s it. I’ll likely give other Sterling books a try but not for a while – and I’ll likely be checking out modern reviews of them before jumping in.

I will say, Tiedemann’s narration saved this one for me. I enjoyed his pacing and he was really able to take an ok story and turn it into something I enjoyed listening to in the right setting.

I’m thinking about this and if Crichton had written a “Twister” like story… oh man, that would be awesome.

A near-future eco-thriller from the bestselling author of Schismatrix Plus and The Difference Engine.

The Storm Troupers are a group of weather hackers who roam the plains of Texas and Oklahoma, hopped up on adrenaline and technology. Utilizing virtual reality, flying robots, and all-terrain vehicles, they collect data on the extreme storms ravaging an America decimated by climate change. But even their visionary leader can’t predict the danger on the horizon when a volatile new member joins their ranks and faces a trial by fire: a massive tornado unlike any the world has seen before.