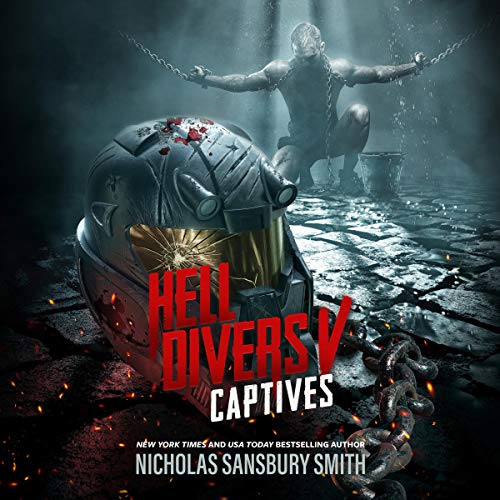 Where the heck do I start with Captives? I literally just started writing my feelings out into paragraphs and I think I’ll try and put them into a meaningful structure if it’s possible.  Hell Divers tells these deeply emotional and real feeling stories and pulls it off – even five books in.

I’ve been trying to figure out how to describe the feeling I had throughout this entire book and it sort of felt like knowing a panic attack was coming on but it never really surfacing (in a good way if that makes sense). There was such a feeling of anxiety from beginning to end. But the entire time I had a smile on my face knowing that things were happening or about to happen (no spoilers here). I was intrigued and hopeful throughout most of the first 60 or 70 percent. The last 30 I can’t talk about at all since it’ll spoil it for you.

Captives made me feel all of my emotions.  There were times it made me laugh and at others it had me in full-on tears.  There were a couple moments where I felt unsure but everything was tied up in a nice little bow.

Smith even made me feel hopeful and hopeless within a few pages. It’s crazy to me that an author can do that to me even this many books in. Not a lot of authors can do that and in my experience even less can do it with the pure adrenaline-fueled fiction like the Hell Divers Series had.

There were a few scenes (especially towards the end) where it was very clear that I was going to cry.  There’s absolutely nothing wrong with that (except that I was driving and it’s hard to drive while crying).

So, can I talk about the book at all without giving anything away?  Well, know if you have not read the first four books – that I’m accidentally giving things away just by mentioning anyone’s name. In Captives, the book title is what three of the Hell Divers are.

We spend the first parts of the book figuring out who is still alive and to what extent along with what their current situation looks like.  We also bounce back and forth between the “sky people” as they’re referred to and life on the Metal Islands. Pretty much anything out of the reminder of what happened from book 4 – anything else I talk about would spoil it for you.

Just know that you’re in for action-packed emotionally driven fantastic fiction that was performed by one of the industries best narrators, R.C. Bray.  I want to write more but honestly, I’m still reeling from just how absolutely amazing this book was. I can’t believe that it’s over and yet I’m also thrilled that I’m done with it.  I loved the ending and I’m happy with where things are.

Humanity has finally found a new home, but the price is blood ...

After a long, perilous journey, Hell Divers Xavier Rodriguez and Magnolia Katib discover the Metal Islands, a sunny habitable zone where thousands of people live by fishing and farming. But this "paradise" is really a violent warrior society ruled by the cannibal king el Pulpo. For the first time in X's life, he is forced to lay down his arms and surrender.

Back on the airships, the Hell Divers are recovering from a gruesome discovery at Red Sphere, where they learned the truth about World War III. Now they must fight one last war-this time for what remains of their own endangered species. As the battle approaches, alliances will be forged, and others broken.

Forced to fight in the Cazador army, X faces his toughest mission yet. Will he help his people come down from the sky and claim the promised land, or will humanity go extinct?