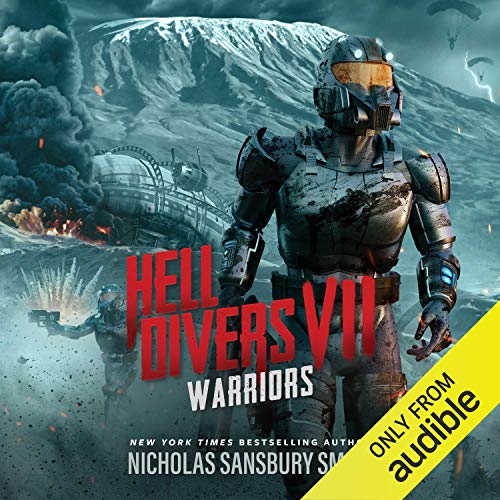 Hell Divers VII: Warriors was one of those books that jumps off of the pages and into your heart. Seven books into the Hell Divers series Smith is still able to pull at my heartstrings and give me both moments I’ve been scared of and moments that I didn’t expect. A few times while reading this my thoughts were “Oh, when I talk to him I’m going to give him a piece of my mind” followed within a few minutes with “oh thank god” or “man… he got me again!”.

Most of the crew that you remember is still here and they end up being split into multiple different groups to save the Hell Divers and those they are protecting from certain death. The skin walkers are still a threat and their leader, Horn, is even threatening to come take the crown from X’s head (okay, we know X doesn’t actually wear the crown).

The thing that I really enjoyed about Warriors was that Smith was able to give each character real moments.  X fell off the wagon (or got back on it again… I guess either works) and has a few moments when he takes in everything that’s happened to him and he partakes in some ‘shine. Ada’s journey is a really interesting one and I’m really glad that Smith spent as much time with her that he did. She has a really interesting character arc, especially within this book that is extremely rewarding and realistic.

So, it’s obvious that I liked this book. I liked it for its realism (for a Post-Apocalyptic futuristic wasteland). I liked it for it’s realism in characters and character development.  I liked that it took its time with certain parts and then went balls to the wall with action in other. Can you tell I liked it?

Overall, combined with the great narration from R.C. Bray – Hell Divers VII: Warriors was easily one of the best books in the series.  Smith outdid himself and wrote a book that jumps off of the pages.

While the Hell Divers cross an ocean to battle the machines, an old flesh-and-blood threat returns to the islands.

The mission to Rio de Janeiro ended in victory, but it came at a dire cost, killing most of those who set out to rescue the stranded survivors. Even worse, the skin walkers’ leader, Horn, escaped with his demonic crew and is coming to take the throne.

Back at the Vanguard Islands, King Xavier Rodriguez has been severely injured in another battle to protect the kingdom. Now an infection threatens to kill the one man who can keep the peace. As he fights for survival, new intel from Rio de Janeiro gives humanity hope of destroying the biggest threat of all: the machines – if the machines don’t find the Vanguard Islands first.