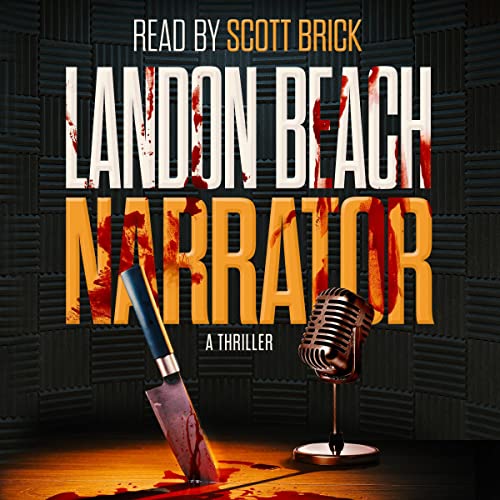 I knew going into this one that I was going to enjoy it. It takes an author whose work I’ve loved so far in the Great Lakes Series and throws all of the settings out – changing in a story about a narrator. I mean, as an audiobook lover, this is just perfect for me. An already skilled psychological thriller author working on a book about a narrator who is in the crosshairs this time. I mean, without spoiling anything – yup, count me in!

Narrator at its core, is a twisty-and-turny style psychological thriller. I knew going into this that Beach would try and throw me for a loop. Let me say that I didn’t see pretty much any of the loops coming. I love how the book seems to be a stream of consciousness of the characters when it’s focused on them, then switching when they talk to the people around them. It made for interesting prose and interaction.

Normally, I don’t specifically tell someone to listen to the audiobook. Still, in some rare cases, I have to implore people to get the audiobook over the physical or Kindle editions. Narrator is one of those cases. First off, just using Scott Brick, one of the best in the business, we’re already off to a good start. But then, the performance he gives in a story where it’s ALL about the narrator(s) just sets this one apart. I found it funny that there was a scene where Beach talked about how it’s every narrator’s dream to narrate a book about a narrator (yes, it’s a mouthful), and I could almost feel Brick smiling while performing that part.

I don’t want to tangent too much and take away from the story, but I can tell that Beach consulted with some narrators about how they prepare and perform in the booth. I’m friends with many narrators, and I love asking them about their processes. Beach can include this without overdoing it. It’s part of the way that these actors/performers get ready, and it’s something they all do before starting. I thought it was great to include all of that in this.

So, I can’t talk much about… really anything because there were so many different avenues that Beach used to trick me while I was enjoying this; talking about them would ruin some of the surprises. But I want to say that this one, being a psychological thriller – was an absolute mind-mess of a book. Beach had me looking in every dark corner. Visiting and revisiting the different thoughts I’d already had. At one point, while listening on my drive home from a funeral, I literally spoke out loud to the book when there was a slight reveal. I NEVER do that, and Beach had me so sucked in that I turned into someone who yells at their book in the car.

This book will be one of the books I recommend to everyone who asks, “what audiobooks should I check out?” It has everything that I want in a book and more. I can’t explain how this book left me feeling. I said it left me reeling in my title, and that’s the closest word I can think of. Every time I checked how far in the book I was, there were still hours and hours left. I felt like it could have ended numerous times. That’s how good the different “oh, THIS is the person that did it” moments were. I just kept thinking, “how much more can Beach cover” – well, the answer was A LOT more.

I knew my review would be long and windy without really covering anything. If someone wants to chat with me about this book after it left me reeling – please reach out to me. I’d love to chat about it.

By the time playwright and actor Shawn Frost had won two Tony Awards by his late 20s, he was seen as a theater prodigy—a meteoric rise that the performing arts community had not witnessed in almost a hundred years. His work? Shakespearean in scope, character, and popularity—boundless and beautiful. His own character? Flawed.

And in a place like New York City, where failings get magnified, Shawn Frost finds that, even from the heights of artistic sublimity, no one is insulated from the demons that have caused the best of entertainers to fall from grace.

After surviving an accident that almost costs him his life, Shawn leaves NYC and the theater for the quiet, picturesque Pacific cliffs of Carmel-by-the-Sea and starts a new life as an audiobook narrator. As he rises through the ranks, narrating best seller after best seller, Shawn Frost once again flirts with artistic immortality.

But as his limitless skills emerge in the exploding arena of voice arts, so do his flaws.

Then, he experiences every audiobook narrator’s worst fear: He is kidnapped by two obsessed fans, determined to make Shawn perform their novel….

Narrator by Landon Beach
Narrator: Scott Brick
Length: 14 hrs and 23 mins
Published by Self Published on July 27th 2022
Genres: Thriller
Format: Audiobook
Buy From Amazon
Buy from Audible
Also by this author: The Wreck , The Sail, The Cabin