Never Mine by Bryce Oakley (Narrated by AJ Ferraro) 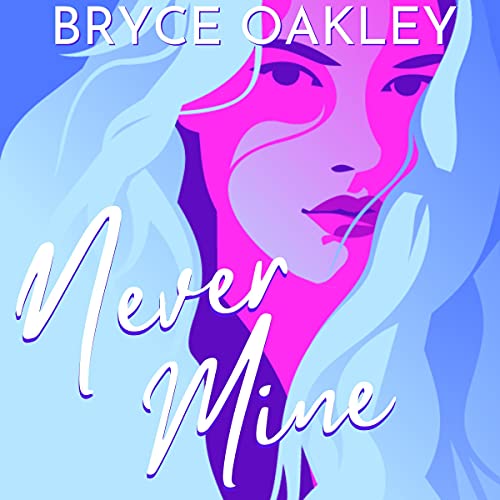 I can’t remember if this is the first “fake girlfriend” type book I’ve read but when looking it up and accidentally reading another review for it (I usually try not to do that) – I saw it categorized as something I’d never heard of before: “sapphic fauxmance.” Sapphic refers to the lesbian relationship. And fauxmance — faux romance, okay that makes sense. So, it’s just something I’d never heard of before and I wanted to call it out. The review that mentioned it is by Melissa on Audible, so a shout out to her for calling that to my attention.

Now, onto the actual book review. Never Mine was one of those books that had me smiling throughout. I love a good sports romance, even when only one of the characters is sporty. It’s made even better by the introduction of Willa, who is basically the least sporty person. She’s into organizing the sugar packets at dinner and making sure she has a backup to her backup. Sage, the sporty one, basically has a team of people who help her get from event to event and day-to-day.

It starts as a contracted quid pro quo arrangement. Sage needs to start looking like she’s settling down and Willa wants to not be the seventh wheel to her friends. It’s a contracted match made in heaven. Of course, feelings start to get involved and so do the feeling of not being good enough (on both sides). I found Never Mine to be so insanely heartwarming and real that it just kept making me smile again and again.

The way that it keeps getting close then veering off and getting close again – I thought would drive me nuts, but it ended up just making me want them to get together more and more. Now, I won’t ruin the ending (even if I gave it away it’s WAY cuter than you’re expecting) but I was very pleased with how the entire book turned out. The character growth of both Sage and Willa made me extremely happy. Sage’s “coming into her own skin outside of soccer” and Willa’s “realizing she’s worth more than she’s giving herself credit for” are both realistic and honest. I love that Oakley was able to weave these very honest feelings of self-doubt into Sage and Willa. It just makes the story feel that much more real.

Overall, Never Mine was a blast and exactly what I needed this week. It was cute, funny, charming, and so much more. The “fake romance” or fauxmance was perfect, an easy 5 out of 5 from me.

What if their fake relationship wasn’t ever just pretend?

Sage Carson has a messy reputation. Sure, she’s a soccer star with World Cup trophies and Olympic medals, but she’s almost as well known for her rebellious behavior off the pitch. She’s left enough gorgeous women with broken hearts in her dust to fill a roster. That was, until she got injured. Now, her frustratingly slow recovery means she’d better secure this new squeaky-clean endorsement deal in order to get back on top.

Sweet, sunshiny Willa Bellamy has a crisis on her hands. She’s used to it – as an events coordinator for the Denver Zoo, it’s her job to handle crises. But when she receives an invite to her ex’s wedding, she’s not so sure it’ll be as easy to handle as an escaped emu during a Girl Scout sleepover. Even worse, when the bachelorette party invite mentions that couples are welcome, she realizes she’s the sole single person invited.

Fifteen years ago, Willa and Sage roamed the same halls of Edgelake High School. When their paths cross again, they decide to team up to solve both their problems – a stable, albeit fake, relationship to snag the endorsement deal and a hot soccer star to make the couples getaway sting a little less…. But when the lines between real and fake start to blur, will they be able to keep the growing heat between them just a game, or will they start playing to win?

The Adventurers by Bryce Oakley (Narrate