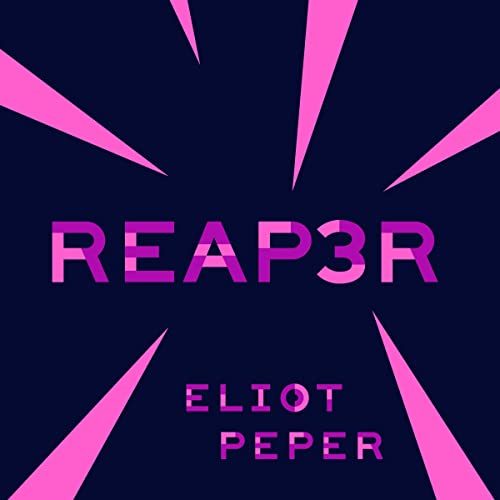 For some reason, when I read an Eliot Peper novel – I end up highlighting lots of passages and quotes from it. In this one, I ended up highlighting 9 different quotes – but that’s because I slowed down as I really started getting into the story. Peper is able to write these insane-sounding futuristic stories that end up feeling real and like they’re about to happen. I could tell that Peper really gave this book his all – this story was insane in all the best ways possible.

I remember reading an interview (or a post) from Peper where he said (paraphrasing) that he would look into what certain niche groups were researching or looking into and make that niche group or product a real thing – then write about what would happen if it did. This feels similar here, I haven’t read anything that feels like Reap3r but that doesn’t mean it’s not based on true research or true products that people are building towards.

Reap3r was probably the most thriller of Peper’s technothrillers – allowing the reader to go along for a ride as things kept getting worse and worse. It really felt like there was no way that certain people were going to get out of this with their lives and/or their dignity. But every time I thought the book was over or there was no way things would get better – something would change.

I’ve been reading Peper for years now, starting with his Uncommon Stock series and each one of them blows me away for different reasons. I know that I’m going into it and learning about technology in a way I never expected. Peper is able to write tales that scare the technology out of me and make me pay better attention to what’s going on in the tech world.

It wouldn’t be an audiobook review if I didn’t talk about the narrator. Now, Peper undertook the overwhelming task of narrating his own book. I’d be lying if I said I wasn’t a little nervous. Being friends with narrators with 100+ books under their belt – I know that getting started is really hard and it’s something that isn’t for the faint of heart. But, I can tell that Peper took this seriously – he seems to have worked with a mentor/teacher to learn the skill and then partnered up with a producer so that it sounds great. And honestly, I couldn’t tell that this was Peper’s first narration. He was able to provide a great story AND great storytelling ability to write us Reap3r, then perform it.

How far would you go to achieve your greatest ambition?

Nothing is what it seems in this speculative thriller about a quantum computer scientist, virologist, podcaster, venture capitalist, and assassin coming together to untangle a twisted enigma that will change the course of future history. Everyone has something to hide, and every transgression is a portal to discovery.

Taking you on a whirlwind journey from the heart of the San Francisco Bay Area to the distant shores of the Galápagos, Reap3r is a propulsive adventure that grapples with the price of progress and how technology shapes our lives and world.