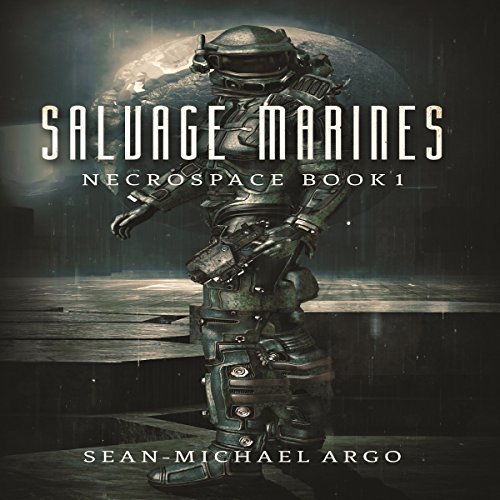 This is the job!

The world that Sam lives in would be the definition of living to work.  You are basically born into debt and work your entire life and can never get out.  Faced with hard decisions about his future and the future of his unborn son, he enlists with the salvage marines in an attempt to break free from the corporate tyranny.

Jeffrey Kafer is great in the narration of Salvage Marines.  He has the perfect voice to keep the action moving in this story.  Kafer has one of those voices that make a scene more believable.

If you are a fan of action, then this book is definitely for you.  This feels almost like a Michael Bay movie written out.  There is a lot of fighting in different areas, planets, and interstellar ships throughout with very little dialogue (just enough to move the story forward). There were a few parts that felt like they were just thrown in there to stir things up without actually moving the story along.  But, it also didn’t really take away from the story either.

The sub-plot about the corporate tyranny was my favorite part of the novel.  I would love to see more about this.  Argo did a pretty nice job setting up the dependence on the company and it was a running antagonist that weaved in and out of the story.  But it was definitely the part that kept me intrigued.

My biggest complaint was the choppiness of the story.  It felt like Argo wasn’t sure what to write about between different missions so it just kind of bounced from one mission to the next and the years just kind of slipped by.  I know that it wasn’t meant to be a long-winded narrative or anything, but I think it could have used a little more “cool off” time between each new battle.

Overall, Salvage Marines was a really good Space/Sci-Fi non-stop action novel for those of you who like their books to be action packed!

To protect his young family from merciless corporate tyranny, Samuel Hyst signs up for the hazardous life of a salvage marine, the foot soldiers of a militarized deep space operation. Hazard pay is high for a reason, and Samuel must endure grueling tours of duty in the abandoned scrapyard quadrants of a war-torn universe.

Endless wars rage across every galaxy, leaving damaged starships, rusted factories, and broken planets in their wake, all ripe for plunder by the desperate and the daring.

Samuel must seize his destiny in frenzied combat against murderous scavengers, horrific monsters, and the elite mercenaries of rival corporations.

Left with no choice but to fight, he must win freedom with a combat rifle and his blowtorch.