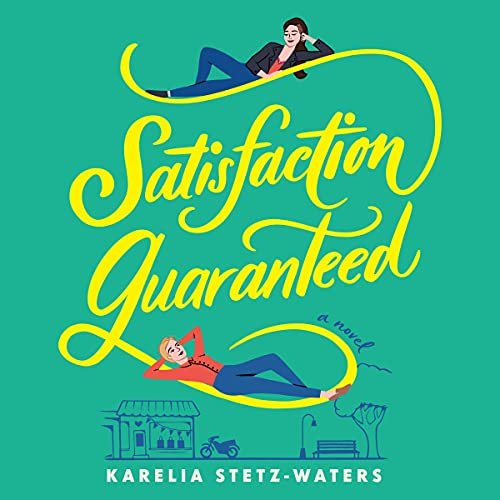 This book didn’t have the right to be this darn good. Seriously, I had to pause it a few times towards the end because I was sobbing happy tears. The synopsis says it’s for fans of Casey McQuiston and I just finished One Last Stop, also one of the cutest books I’ve ever read – so I would say that fits pretty well. Which also means I’m going to be checking out Abby Jimenez very soon!

Now, back to Satisfaction Guaranteed. Stetz-Waters does a fantastic job writing basically two polar opposite characters and throwing them into a situation that, really, neither one of them could control. I liked that Cade had to soften some of the things that she was known for and that Selena had to “grow up” (which she was already attempting to do). Also, both of their pasts where really there and something that both of them had to get over (with each others unknowing help). Cade has pretty much only had people enter her life because of who her parents where. She also had a particular problem that she hadn’t solved – and wasn’t sure it was ever going to happen. While Selena was basically at rock bottom emotionally after her break up with her former art school advisor and overall bad-person.

Now, take those two things, throw in a crazy relative that passed away leaving a sex-toy shop to the both of them and you have one of the craziest AND one of the cutest books I’ve read ever. Satisfaction Guaranteed had me grinning ear to ear as it progressed – knowing that there was going to be a moment when these two beautiful people would finally crash into each others orbit. Then after that happened, the things that were said, done, etc. had me in full on happy sobbing tears. It’s been a while since a book has had me that torn up over what was happening — good or bad!

Lori Prince is genuinely one of my favorite narrators, especially romance narrators. Every time I see her attached to a book I usually pick it up. This was no different, and her narration added to the story like it always does. Her performance was perfect for both Cade and Selena.

If you’re looking for a book that’ll put a smile on your face, look no further than the aptly titled Satisfaction Guaranteed.

For fans of Casey McQuiston and Abby Jimenez comes a bold, hilarious, and out-of-the-box novel about mixing business with battery-operated pleasure….

When it comes to her career, Cade Elgin has it all figured out. Only “professional talk” has become her default mode, relationships are nonexistent, and don’t even mention the word “orgasm”. All work and no play makes Cade a dull human. But when she inherits a sex toy store, Cade is caught between business and a store filled with every imaginable kind of pleasure – including her infuriatingly irresponsible and deliciously sexy new co-owner.

Selena Mathis learned the hard way that she can have too much of a good thing. Which is precisely why she’s taken an oath of celibacy and is focusing on how to make Satisfaction Guaranteed a success. She won’t mess this up. Not this time. But once again, Selena’s emotions are getting in the way and tempting her with a serious attraction to buttoned-up Cade.

But the shop isn’t exactly vibe-ing, and Cade and Selena are on the verge of losing both their income and the possibility of love. Can they find a way to work together…before Satisfaction Guaranteed runs out of batteries?