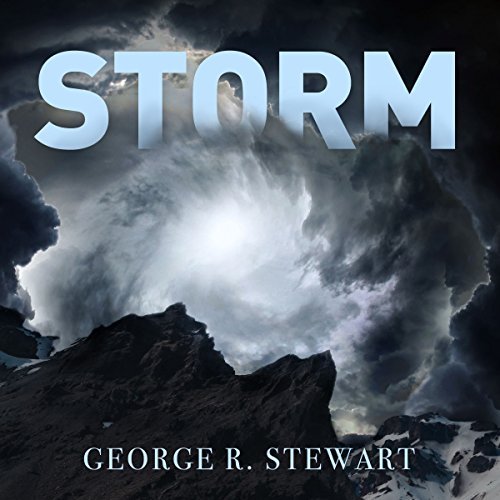 Storm Is a Historic Book, But Slow

You can tell by this line from the description that this book is going to have a lot of science in it.  I was not at all prepared for the baffling amount that Stewart included.  “Originally published in 1941, Storm is a rare combination of fiction and science by a master storyteller, drawing upon a deep knowledge of geography, meteorology, and human nature.”

I really wanted to like this book. It was the basis for actual storms being named by today’s meteorologist (which I did not know until I saw this book was coming out).

There were scenes in this that just felt really drawn out – with lots of details that a normal person not only doesn’t need but confuses them.  I took a meteorology class in college (yay for a random science credit) because I was interested in them but there was a lot of talk about milibars and very specific scientific/weather-related science that it felt a little like I was drowning in them.

There was, what felt like an endless lead up to the actual meat and potatoes of Storm.  It felt like a monumental feat once I finally got to the good stuff.  Stewart really wanted us to know everything about the build-up of the storm.  But unfortunately, the meteorological build-up of a storm on paper isn’t as interesting as it is in real life.

Overall, a historical fiction book that really was one of the first Cli-Fi books ever written – but it was a little too slow for me.

I thought that Patrick Lawlor did a great job with the narration of Storm.  He kept me interested far longer than other narrators could have and I appreciate and thank him for that!

A violent storm sweeps through California, taking on a life of her own. Making her way from the Pacific Coast, she gains momentum as she approaches the Sierra and transforms into a blizzard of great strength, covering mountain ranges and roads with twenty feet of snow. Originally published in 1941, Storm is a rare combination of fiction and science by a master storyteller, drawing upon a deep knowledge of geography, meteorology, and human nature.

“In Storm we are far from freeways, from megapopulation, from sprawl, from beach TV, from stress, from road rage. And we are in touch with a much deeper reality. Of land and water and weather, of humans huddled together on the planet in a dark universe.” -Ernest Callenbach, in the foreword