The AM Show by T.B. Markinson & Miranda MacLeod (Narrated by Lori Prince) 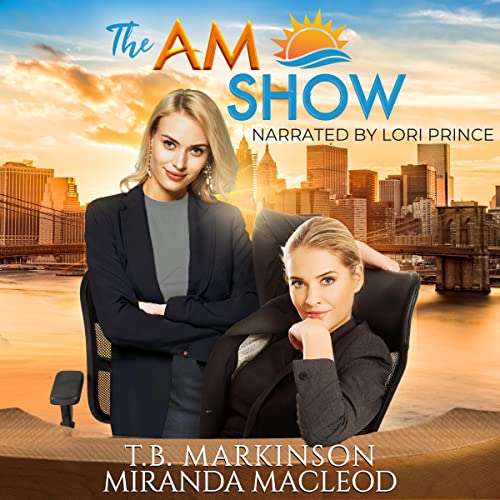 Wow This Was Cute

I love December because two things happen – LOTS of good books come out and I have time to read some of those books. All readers know they don’t get to read every book they want. They should be called TBR skyscrapers, not piles. But, when I posted about The AM Show in my new and notable, I knew I was going to have to spend a credit and quickly enjoy this one. Wow am I glad that I did.

I went into it blind other than the cover. I figured I knew what it was going to be about and I was pretty correct in my assumption. That did NOT take away from my enjoyment of it in the least. I knew from previous other books narrated by Lori Prince that I was going to at least enjoy the narration – but wow did I ever love this story. I won’t go into too much detail over that since you can read the synopsis of it, but the differences between Amanda Morgan and Dakota were just right. Amanda was the “ice queen” who was fierce and everyone nicknamed “the dragon lady” – whereas Dakota was bright and sunny and tried to treat everyone with respect. It’s not that they were so different – it was just nice seeing the differences and how it brought out the best in both of them.

I also really enjoyed the slow burn aspect of The AM Show. I spent a lot of the time not wondering if, but when they were going to get together. I say slow burn, but also recognize there was an incident early in the book that sort of goes against the normal slow-burn pacing. Most of the story revolved around these two women and how they were going to fight through chemistry at home and misogyny at work to better both of their lives separately.

I will say without ruining or spoiling it – I LOVED the ending of this. Not even the ending you think I’m talking about. It was so satisfying to read what happened and how things were going to be handled moving forward. So good.

Overall, I know I gushed a lot up there but I flew through this one, and both wanted to know how it ended but didn’t want to stop reading about Amanda and Dakota. Lori Prince does a phenomenal job narrating this and breathing even more life into it.

Would you give up your lifelong dream for a shot at everlasting love?

Amanda Morgan is a morning show host with a fierce reputation, but a bitter divorce has left her feeling all washed up. Being mistaken for a grandmother at her own son’s wedding has her teetering on the edge – until a stranger at the reception rocks her world.

Dakota Washington is a young reporter who is flabbergasted to meet her career idol – and biggest celebrity crush – at a friend’s out-of-town wedding. Their night together goes beyond her wildest fantasies. And she’s had a lot of them.

They were never meant to see each other again – until fate steps in, landing Dakota a job at Amanda’s network in New York City. Thanks to a draconian employment contract, the network could fire them on the spot for getting romantically involved. They agree to keep their distance and never breathe a word about their past.

Except every time they’re alone for more than five minutes, they end up having sex. Soon, it’s obvious this is more than a fling, leaving them with an unthinkable choice: Give up the careers they’ve poured their souls into or lose the love of a lifetime. Which one will be easier to walk away from?

If you enjoy scorching celebrity age-gap romance with a touch of heart, don’t miss the latest collaboration of Miranda MacLeod and TB Markinson.

Training Ground (Girls of Summer #1) by