The Genius Plague by David Walton (Narrated by Nick Thurston) 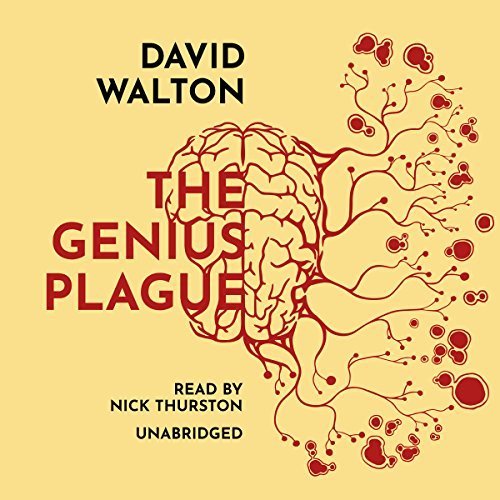 Kept Me Guessing Til The Bitter End

I had a long paragraph about what I thought this book was going to be going into it, but that really doesn’t matter.  The Genius Plague was an excellent book telling a great story told by an excellent storyteller.  I’ve never read anything by Walton before, but man, if he writes all his stories like this I’m in for a treat.

Without ruining the book and it’s many surprises.  The Genius Plague is about a lot of things.  Family acceptance, dementia and Alzheimers, the NSA and more. It’s a globe-hopping story that takes many twists and turns along the way. What if you could take something that made you smarter, but to be that smart you had to give away a little piece of you?

First and foremost, I loved this book.  I can’t find many faults.  His depiction and description of living with someone with dementia and Alzheimers is spot on considering I lived with my Grandpa who had it for years. The emotion around it on good and bad days (and especially good days for a while) is just perfect. So much so, I wonder if Walton has had a family member have this terrible disease.

I thought that the biological parts of this story were really well done.  As someone who really enjoys his way around a bio-thriller (sometimes called Medical Thrillers), I thought that the research put into the topic at hand was excellent. I didn’t have any issues with this.

The character building was also great. I found myself really falling for these characters and hoping that they would make it out alive.  When I had about an hour left in the book I was super worried about what was coming.  I honestly didn’t know how it was going to end.

Sometimes I can predict a book early on while others it gets obvious the deeper you read.  With The Genius Plague, I couldn’t figure out what was going to be on the next page let alone the next chapter or the end of the book. I thought that Walton did an excellent job keeping me as the reader in the dark with what was going to happen next. There wasn’t a lot of foreshadowing or hints as to what is to come next.  It was a pure surprise from beginning to end.

I have to be honest, I was worried.  I read another book about fungus (and enjoyed it) last year and I was worried that this would follow the same path.  It did not at all.  I was also worried that I was going to pick up yet another book with plague in the title and have it be little-to-nothing about a biological agent at all.  I was wrong there, too.  Sure, there’s a lot of action in between but believe me, the build-up is worth it.

Overall, The Genius Plague is definitely the best book I’ve read so far this year (sure only 5 days into the year), but I’m sad I didn’t finish it in 2017.  It would have definitely made my Best Of list.

Hearing Nick Thurston perform the language that they were deciphering and trying to crack was easily one of the coolest parts of this audiobook.  I’m not sure how closely Thurston and Walton worked together to get that part done, but it was well worth listening to the audio alone. His narration really made this and I’m glad that I listened to it instead of reading it.

What if the pandemic you thought would kill you made you more intelligent instead? In the Amazon jungle, a disease is spreading. To those who survive, it grants enhanced communication, memory, and pattern recognition. But the miracle may be the sinister survival mechanism of a fungal organism, manipulating the infected into serving it.

Paul Johns, a mycologist, is convinced the fungal host is the next stage of human evolution, while his brother Neil, an analyst at the NSA, is committed to its destruction. Is the human race the master in this symbiotic relationship, or are we becoming the pawns of a subtly dominating and utterly alien intelligence?

David Walton is the author of the international bestseller SUPERPOSITION, a quantum physics murder mystery, and its sequel, SUPERSYMMETRY. David’s first novel, TERMINAL MIND, won the 2008 Philip K. Dick Award for the best SF paperback published in the United States for that year.
In his latest book, THE GENIUS PLAGUE, a pandemic threatens to destabilize world governments by exerting a subtle mind control over survivors.