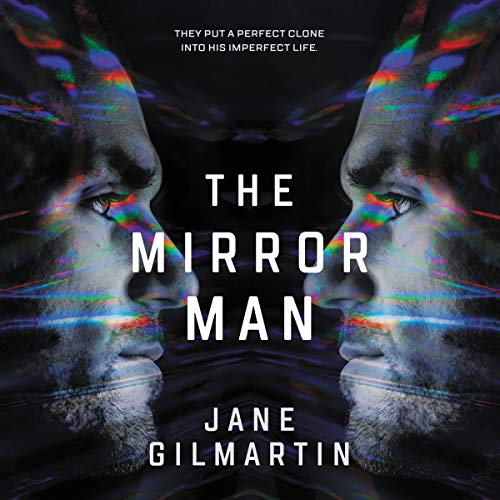 I Highly Recommend This One

I haven’t read a book that’s kept me this engage in a really long time. Once I got a few minutes into it and realized what the story was going to be about I was riveted. I can honestly say I haven’t read a good cloning book in quite some time and this one would probably top all of the other ones. Gilmartin does a phenomenal job turning Jeremiah into someone you really care about and someone that you want to succeed, even if you’re not sure what success looks like.

The Mirror Man was one of those books that will be stuck in my head for quite some time. I think it was the combination of a great character, good pacing, and a story that felt just true enough that I could see it happening. Gilmartin delivers a title that grabbed my attention and wouldn’t let it go.

As the story progressed (as did the “original” Jeremiah) the things that changed in him were fascinating. The things that he was able to see and change were all things that we would change if given the chance. It’s almost as if he got to see himself how everyone saw him, something that would either be great or horrible (I won’t spoil anything, but that’s a major theme in the book).

James Anderson Foster delivers a great performance here – I really felt like Jeremiah and him were the same person. But it wasn’t just the main character that shined. He really brought out the nerd in his son and in his caretaker. His performance took an already great book and made it even better.

Overall, The Mirror Man will be one of the books I remember way after 2021 is over. It’s a book that I highly recommend for anyone who likes a good technothriller or a near-future science fiction.

Meet Jeremiah Adams. There are two of him.

The offer is too tempting: be part of a scientific breakthrough, step out of his life for a year, and be paid hugely for it. When ViMed Pharmaceutical asks Jeremiah to be part of an illegal cloning experiment, he sees it as a break from an existence he feels disconnected from. No one will know he’s been replaced – not the son who ignores him, not his increasingly distant wife – since a revolutionary drug called Meld can transfer his consciousness and memories to his copy.

From a luxurious apartment, he watches the clone navigate his day-to-day life. But soon Jeremiah discovers that examining himself from an outsider’s perspective isn’t what he thought it would be, and he watches in horror as “his” life spirals out of control. ViMed needs the experiment to succeed – they won’t call it off, and are prepared to remove any obstacle.

With his family in danger, Jeremiah needs to finally find the courage to face himself head-on.