The Wreck by Landon Beach (Narrated by Scott Brick) 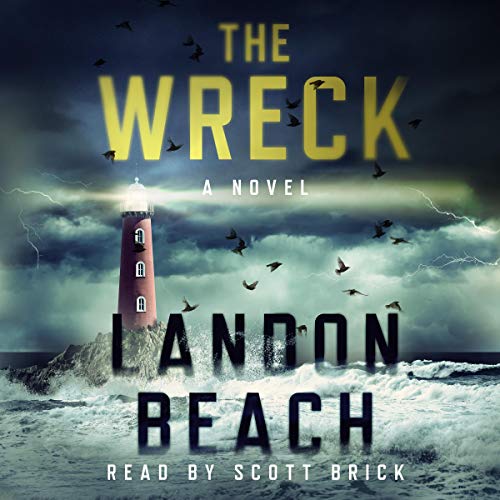 Can we talk about how gorgeous this cover is? I checked the inside cover of my ebook and see that “Design for Writers” designed it and they did a fantastic job of bringing Beach’s work to readers eyes.

I went into The Wreck with an open mind. I had no real idea what it was going to be like or about, but I sort of hoped it would be a combination of Nick Sullivan and a little bit of the first ever book I read from Preston & Child – Riptide. And it definitely was.  Then I saw that there was praise from one of my favorite Deep Sea Thriller authors Steve Alten. Finally, Scott Brick narrating it? Freaking sold!

The Wreck was one of those books that had a couple of stories paralleling each other. And each one had it’s own feel to it – finishing at or near the same time at the end of the book. Beach was able to cause me to be actually uncomfortable during parts of the book. He wrote a specific character to just have that creepy vibe to them and I couldn’t tell what was going to happen, but I knew something was going to happen at his hands.

Nate was one of the main characters and he was extremely well written out. From almost the first page I knew that I liked him. Then throw in Hutch who is that damaged guy that you end up falling in love with and you have a fantastic set of characters. And that’s leaving out Brooke and Lucille who were also exactly the characters they needed to be for this story to work.

The kicker is that this takes place in the Great Lakes and not in the Caribbean. Now, I love a getaway book like Nick Sullivan’s Deep Series – but having it take place in places I’ve been or at least know where they are on a map brings this one home for me. I loved that Hutch was a Great Lakes historian and that everything they talked about where all things that I’m used to hearing or at least know about.

But, the story itself was really enjoyable. Fast-paced when it needed to be and slow and steady when the pacing required it. I’m shocked that this is a debut novel. It has the chops of a seasoned author who’s written countless novels. Landon Beach is a name you should watch out for. And a name that I’ll be looking for from now on. I can’t wait to get into his next book – The Sail (also narrated by Scott Brick)

“Landon Beach’s debut novel The Wreck is a modern-day Treasure Island that keeps the reader turning pages.” (Steve Alten, New York Times and international best-selling author of The Meg and The Loch)

Nate and Brooke Martin arrive at their summer cottage along the rapidly gentrifying Great Lakes shoreline. The beach is warm, the water is cool, and the sea breeze is blissful – perfect conditions for rekindling their strained relationship.

However, on a morning stroll along the beach, Nate finds an unusual gold coin half-buried in the sand. Where did it come from? Are there more?

Teaming up with reclusive ex-Coast Guard officer and Great Lakes master of the deep Abner Hutch, Nate dives for clues to the treasure’s origins. But when word leaks that there may be a fortune hidden under the waves, they find themselves hunted by mega-rich residents up the coast who are willing to do anything to advance their extravagant lifestyles.

Will the Martins change their family’s fortunes, or will the summer vacation end in a tragedy?

Put on some sunscreen, unfold a beach chair, and get ready to discover The Wreck.

The Wreck by Landon Beach
Narrator: Scott Brick
Length: 7 hrs and 9 mins
Published by Self Published on February 19, 2020
Genres: Suspense
Format: Audiobook
Also by this author: The Sail, The Cabin