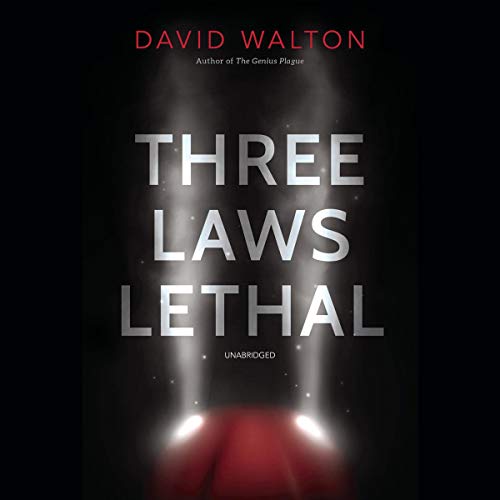 Incredibly Well Thought Out (and Terrifying)

First and foremost I need to point out that this book scared the heck out of me in the best way possible.  I was already familiar with Walton’s work from The Genius Plague, so I knew I needed to read this when it was announced. This time instead of a fungus he took a shot at writing a book about self-driving cars (and the technology around it). He wrote a book that felt so real that I found myself looking at self-driving cars in a different light.

I read this on a drive to and from Washington DC with my wife where we got completely into the story and entranced by the amazing storytelling of David Walton.  Three Laws Lethal tells of a future where self-driving cars are created and evolve into potential killing machines.

Every piece of technology or business that Walton wrote about felt so real that I found myself wondering if he based it off of real companies that exist today.  The main three characters all go to college together and create a company (or were at least trying to create one) where self-driving cars would talk to each other.  I’ve actually talked about this with friends and colleagues and said that communicating cars would be the future (since they would know each other’s moves and would be able to drive much faster and safer than any human could).  When Walton introduces this idea in Lethal… I was already hooked.  Little did I know that I had way more story left.

I won’t go into intimate detail as to what happens after this first company but holy crap are you in for an incredible story.  Walton’s character creation, storytelling, and overall research into the topics in Three Laws Lethal made this book one that I won’t soon forget.  This will definitely be in my best books of 2019 without a doubt.

Shawn Compton did a great job narrating this.  There were a few times where a character who we didn’t know was bad yet but would get much worse was introduced and within 20 minutes of hearing Walton’s writing and Compton’s performance – I knew I didn’t like the person.  He was able to voice each character differently and put the correct feeling into the book that it deserves.  An A+ performance.

In a near-future New York City, where self-driving cars roam the city streets, rival entrepreneurs Brandon and Tyler compete to produce the smartest AIs, training them in a virtual game world to anticipate traffic and potential customers better than the competition. As the two rivals struggle to dominate the market, their personal enmity pushes them to attack each other's reputations, hack each other's cars, and develop ever more sophisticated algorithms to keep their customers safe. The result? Intelligent computers that excel at using all available data to determine which humans should live, and which should die.

Only Naomi, inventor of the virtual world in which the AIs train, recognizes that they are developing goals of their own - goals for which they are willing to kill. But will she stop them, or will she help her creations achieve their full potential?

Also by this author: The Genius Plague