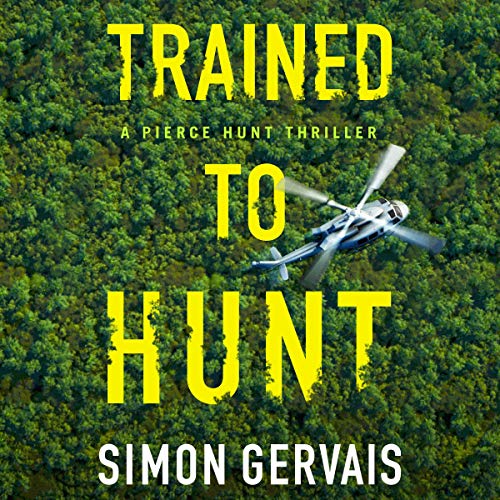 Sometimes you get lucky when you pick up a book to review much after its release date.  I picked up Hunt Them Down just a week ago and loved it only to find out that book two in the series was coming out a mere few days later.  I felt like I hit the jackpot.

Within a few minute of diving into Trained to Hunt I’m already nervous for Anna. I know things are about to get awful for her and I know that Hunt will move the heavens and the earth to protect her but Gervais sets this anxiety up so early that I knew I was in for a non-stop action-packed thriller from the get go. The irony is that the specific scene I was worried about wasn’t even the bad part.  Gervais sets up a really nice bait and switch here and threw me for a complete loop.

Trained to Hunt was a tour-de-force and kept me on the edge of my seat so much I might need to replace it.  The action was fast-paced and relentless and the non-action set up scenes had me falling even more for certain characters.  Gervais has quickly become one of my favorite Thriller writers.

There are little things that can make a cover jump out at you.  One of them is the little details in the scenery around the titling of a book.  If you look closely at this one you’ll see that some of the trees are “over” the letters in Trained to Hunt.  It’s a subtle touch but one that jumps out at readers like me.  I love that they took the time and energy to do it and I think it paid off. This cover is gorgeous.

Obviously, including Bon Shaw (I won’t out the pseudonym here, but google it or for god’s sake just listen and you should be able to figure it out) as the narrator for this was a fantastic idea.  He is able to take any story and make it great.  Obvious great writing allows for him to perform, and Gervais is not short on that at all.

Overall, this was a fun book from beginning to end that ramps up the anxiety to 11 and rides it like a rollercoaster throughout.  A definite for any thriller lovers out there.

No limits. No rules. No mercy. Can one man take down an entire drug cartel?

Former Army Ranger Pierce Hunt is second-guessing his decision to join a CIA hunter-killer team that will take him far away from his daughter. But when a new performance-enhancing drug kills four football players—including his daughter’s boyfriend—settling down becomes the last thing on Hunt’s mind.

When Anna Garcia, Hunt’s lover and head of the largest drug cartel in Miami, becomes the prime suspect in the investigation, the stakes become even more personal. Not convinced that Anna is capable of such extremes, Hunt looks far and wide for evidence to exonerate her and stop a vicious enemy who plans to flood the US market with an addictive new drug. Outgunned, outmanned, and out of time, Hunt is the country’s last hope to stop a deadly new drug from making countless new victims.